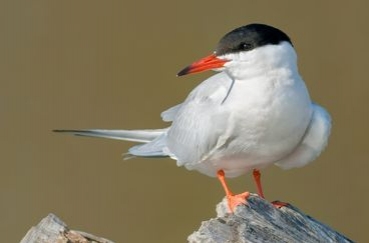 Please find below a summary of work on Common Terns at Presqu’ile Provincial Park in 2022, which was supported, in part, by a Research Grant from the Friends. We presented data from this year at the Great Lakes Area Working Group on Colonial Waterbirds at Altmar, NY in November.

Prior to this year, in the autumn of 2021, Don Tyerman (Presqu'ile's Biodiversity Specialist) and his crew erected a new predator exclusion grid on Gull Island, near the existing one where Common Terns had successfully nested in that year. Construction was funded directly by the Friends and doubled the protected nesting space for terns on this island.

Logistical challenges posed by travel between Penn State and Brighton meant that we were not based for the whole season at Presqu’ile in 2022, but Steve came for onsite work in May and again in midJune. Don and his crew undertook much of the monitoring and construction and we provided equipment and direction during many conference calls. We helped coordinate the work, brainstorming solutions to the various challenges that arose, trained Don and Mike in banding, and also hired a bird bander (Allyson Parker) who was supported using Friends funds.

We started work early in the season on High Bluff Island (in late April) before the terns arrived. Our goal was to maximize the attractiveness of habitat for terns on this island (which had a larger number of grids and thus more protected nesting habitat). We developed new social attraction playback equipment and a series of 24-hour long sound files of an active tern colony, from recordings we had made in New York State. Since we knew there was a daily cycle in tern vocal activity and that it wasn’t quiet at night, we reasoned that 24-hour recordings would be most attractive to terns. At the same time, Don constructed new wooden decoys for use in this social attraction effort. During Steve’s first visit we optimized the sound and decoys and within a matter of minutes were being swooped by a pair of prospecting terns! We also cut back vegetation and provided gravel substrate to promote attractiveness for nesting terns.

All tern nests initiated were marked and monitored. Despite interest in the grids on High Bluff and a total of 6 nests laid (and at least one chick fledged), terns preferred nesting in the grids on Gull Island, where they had been successful in the previous year. The Gull Island colony grew rapidly, from ~60 nests in mid-May to over twice that size by early June. In total, 167 nesting attempts were recorded in 2022, which is the most since we began recording 15 years ago. To protect these nests against possible predators (especially Black-crowned Night Herons, which are the chief predator at this colony), Don and his crew erected further grids during the breeding season, connecting existing grids to double the available grid habitat and protecting over 70% of the nests at the colony. During his June visit, Steve helped direct management (including remote predator detection, vegetation and exclusion grid optimization), assisted monitoring efforts (recapturing all chicks, and resighting banded fledglings), trained banders, continued trapping and banding adult terns for demographic studies, and advised on the best approaches for the rest of the season.

In 2022, we did not record any obvious nest/chick predation in trail cameras, despite adequate coverage, although productivity was higher within the grids (1.61 chicks fledged per nest) than outside of them (1.31 chicks fledged per nest), suggesting that a few chicks may have been predated outside the grids, most likely by opportunistic gulls. As a result of successful management and low predation pressure, 2022 was the best breeding year on record for Common Terns at Presqu’ile. Across the colony as a whole, tern nests fledged an average of 1.5 chicks, which is high for inland colonies.

The continued growth of this colony (which has more than doubled in size since use of grids began in 2013) and productivity are a testament to successful management strategies and the diligence and resourcefulness of all those who have helped make this project a success. Next year and into the future, we hope to build on this success by increasing available protected habitat for this species at Presqu’ile and foster growth and productivity of this important Common Tern colony.

In 2022, Friends’ funds were used to help purchase and construct exclusion grid components and sound systems, pay for Steve’s travel, and pay for an additional bird bander. The generous support of the Friends of Presqu’ile was acknowledged at several forums, including talks at various institutions (Cornell University Department of Natural Resources and the Environment, Cornell University Biological Field Station, the Pennsylvania Game Commission, and the Buffalo Ornithological Society), as well as three professional meetings: the 41st Annual Meeting of the Great Lakes Area Working Group on Colonial Waterbirds, the 46th Annual Meeting of the Waterbird Society, and the International Ornithological Congress 2022.

We are very grateful for the Friends’ continued support of research and conservation work on Presqu’ile’s Common Terns. The additional support for expansion of exclusion grids and logistics of monitoring has helped this project flourish through the pandemic and has contributed to the growth and productivity of this important waterbird colony. We also thank Don Tyerman, his crew and all the staff at Ontario Parks for their continual effortsin conservation and management of Common Terns.

Copyright © 2023, The Friends of Presqu'ile Park. All rights reserved.
Site Designed By / Site Powered By OSM